Miguel Zenón(alto saxophone) and Luis Perdomo(piano) perform pieces by musicians either born and raised in the Bronx or with strong roots tied to the Bronx.

If you enjoyed the show: We welcome any donations at bronxartsensemble.org/donate

Miguel Zenón(alto saxophone) and Luis Perdomo(piano) perform pieces by musicians either born and raised in the Bronx or with strong roots tied to the Bronx.

Watch the concert premiere below!

Premiering on Facebook and Youtube, Miguel Zenón presents a behind-the-scenes look at the duo project he has developed with Luis Perdomo for BAE’s Jazz Appreciation month celebration. 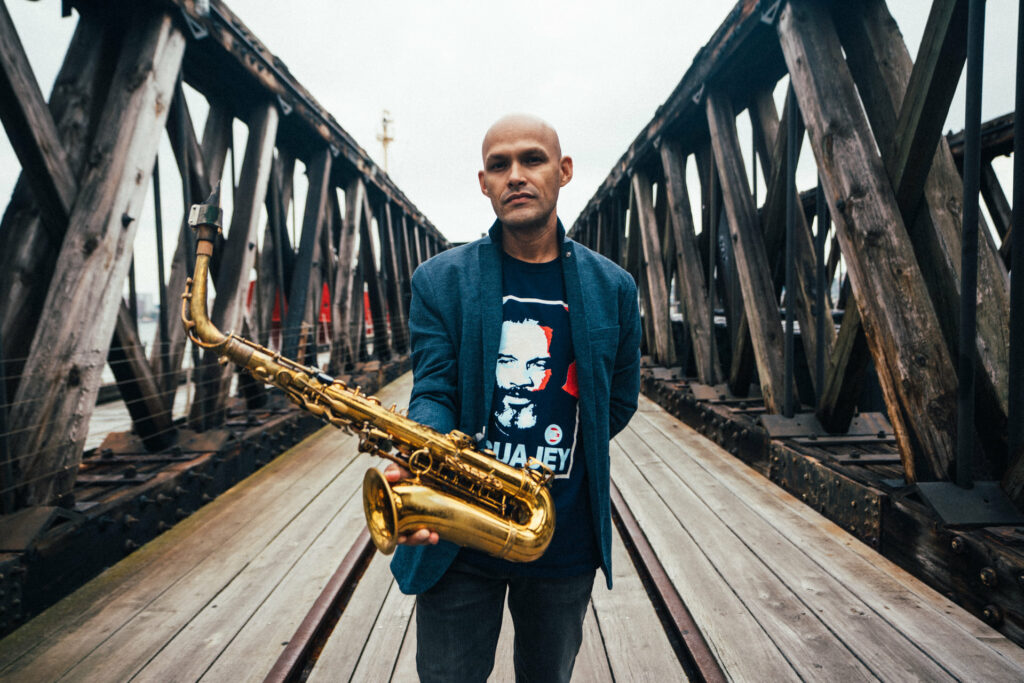 Multiple Grammy Nominee and Guggenheim and MacArthur Fellow, Miguel Zenón, represents a select group of musicians who have masterfully balanced and blended the often-contradictory poles of innovation and tradition. Widely considered as one of the most groundbreaking and influential saxophonists of his generation, he has also developed a unique voice as a composer and as a conceptualist, concentrating his efforts on perfecting a fine mix between Latin American Folkloric Music and Jazz.

As a composer, he has been commissioned by SFJAZZ, The New York State Council for the Arts, Chamber Music America, NYO JAZZ, The Logan Center for The Arts, The Hyde Park Jazz Festival, The John Simon Guggenheim Foundation, MIT, Jazz Reach, Peak Performances, PRISM Quartet and many of his peers.

He has given hundreds of lectures and masterclasses and has taught all over the world at institutions, but perhaps what best reflects his commitment to education and cements his growing reputation as a “cultural ambassador”, is a program that he founded in 2011, called Caravana Cultural, a project born out of the desire to present music at its purest form, with no other motive than bringing it directly to the people.

Since February 2011, Zenón has presented a concert every four to six months. Each concert focuses on the music of a specific jazz legend (Charlie Parker, Miles Davis, Duke Ellington, among others) and is preceded by a pre-concert presentation that touches on the basic elements of jazz and improvisation. Since 2005 Zenón has also personally organized “Jazz Jam Sessions” in the area of San Juan, as a way of creating a platform for younger jazz musicians to grow and interact with one another.

Perdomo has emerged as one of the most in-demand sidemen – as evidenced by his celebrated work with a wide array of jazz and Latin stars – from Ravi Coltrane to Ray Barretto, and by his six critically- acclaimed recordings as a leader. Perdomo’s lyrical and logical pianism embodies Bud Powell’s bop-at-the-speed-of- swing, Oscar Peterson’s technical brilliance, and Ahmad Jamal’s melodic genius. Perdomo, from the age of 12, was playing on Venezuelan TV and radio stations, but he eventually realized that he would have to travel to New York City to fulfill his musical destiny.

Perdomo has appeared on over two hundred records, and has become a first-class sideman to artists like Dave Douglas, David Sanchez, Tom Harrell, Steve Turre, Ben Wolfe, Ray Barretto, Brian Lynch, David Gilmore, Conrad Herwig, Ignacio Berroa, Ralph Irizarry and Timbalaye and other great musicians. He was a member of Ravi Coltrane’s Quartet for ten years, and is a founding member of the Miguel Zenón Quartet. Perdomo recorded on three Grammy-nominated CD’s: Coltrane’s Influx, and Zenón’s Esta Plena, and Alma Adentro: The Puerto Rican Songbook. Perdomo’s recordings as a leader include: Focus Point (2005), Awareness (2006), Pathways (2008), the critically-acclaimed Universal Mind (2012), with Jack DeJohnnette and Drew Gress, The Infancia Project (2012) and Links (2013).

Filmed at The Jazz Gallery: