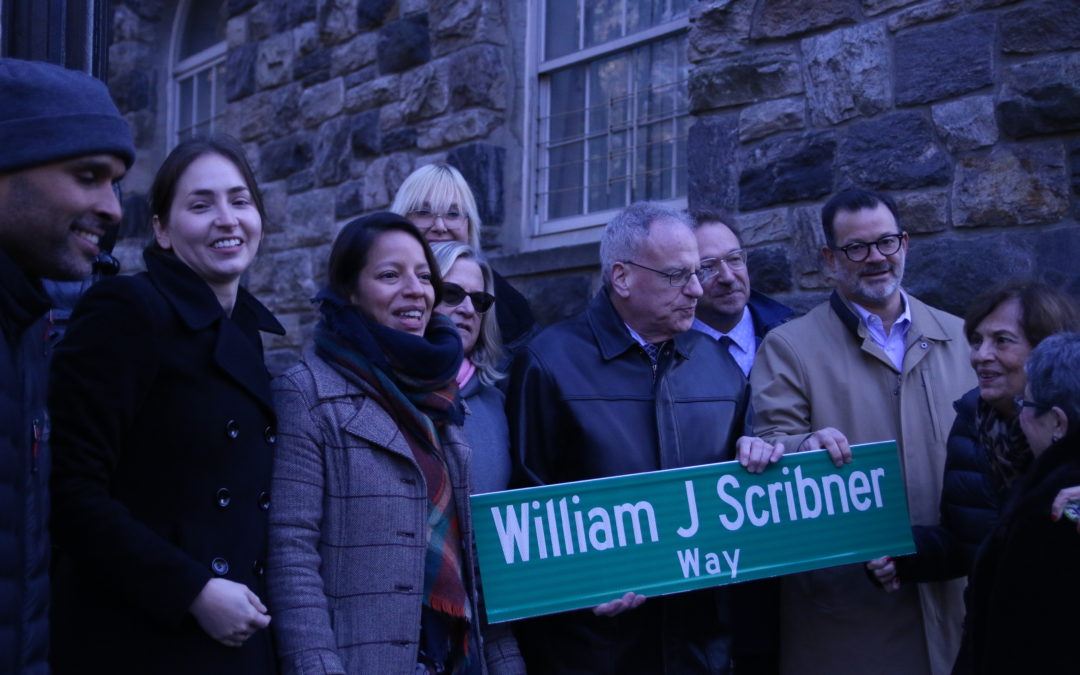 On Friday, November 15th, friends of BAE, for joined us for the street naming ceremony of our Founder, William J. Scribner, whose vision made music and art accessible to hundreds of thousands of Bronx students and communities! The ceremonial event was initiated by the New York City Council and was sponsored by the office of Councilman Andrew Cohen, and honors Mr. Scribner for his invaluable contribution to the Bronx in creation of the BAE, the first organization of its kind offering free or low cost concerts for the borough as well as school arts-in-education programs that are widely acclaimed throughout the city and state.

In addition to Councilman Cohen, the event was attended be attended by local elected politicians and BAE supporters including Assemblyman Jeffrey Dinowitz, as well as other supporters of the Ensemble through the years, BAE Board of Directors and staff and family members of Mr. Scribner. Following the naming ceremony there will be a reception and musical program at adjacent Vladeck Hall, Amalgamated Houses, featuring Artist Members of the BAE performing the Beethoven Septet, Op. 20 for winds and strings.

Bronx Arts Ensemble was founded in 1972 by William Scribner to fulfill the recognized need in the borough for affordable concerts in local neighborhoods, presented by a professional ensemble. Early concert sites were Van Cortlandt Park, Woodlawn Cemetery, Orchard Beach, College of Mount St. Vincent, Bartow-Pell Mansion Museum, Hostos Community College, Hunts Point Cooperative Market, New York Botanical Garden and Bronx Community College, as well a private homes in Riverdale. In 1979 a Residency was established with Fordham University comprising free concerts for the college and community, summer concerts and programs at both Bronx Rose Hill and Lincoln Center campuses. BAE subsequently expanded activities to include free programs in libraries, senior and community centers and numerous in-school concerts, introducing students to instruments with accessible music. In 1981 the BAE received the NYC Arts &amp; Business Council Encore Award for adventurous programming and service to the people of New York, and the year following the 9/11 attacks in New York, BAE orchestra was chosen to represent the Bronx at a memorial concert in Van Cortlandt Park for an audience of 2000.

The BAE under Mr. Scribner’s leadership presented many New York and world premieres and was at the forefront of performing music of Latino composers throughout the borough, as well as compiling an extensive list of recordings and CDs by its musicians. In answer to the pressing need for arts instruction in the city’s schools, William Scribner developed a full program of arts- in-education for Bronx students comprising music, theater, dance and visual arts, later expanded to also include media arts, music theater production, capoeira, Latin and African drumming and many other skills. Mr. Scribner developed these programs while maintaining an active career as a busy freelance bassoonist in the New York area. His legacy includes at present concerts in a variety of musical styles and genres throughout the Bronx, and an expanding arts- in-education program employing some 80 teaching artists in over 40 schools.