How 4 families are talking to their kids about racism: Featuring BAE Staff Member, Judith Insell 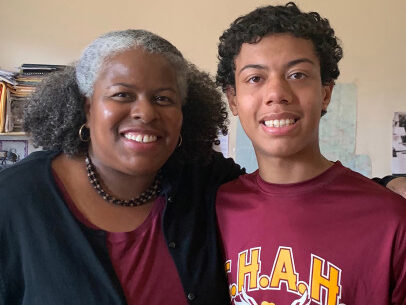 Click here to read the published article, or read an excerpt below:

As a child, now-17-year-old Billy Staack — who identifies as biracial — first learned of the death of Trayvon Martin on the news.

“ ‘What happened? I don’t understand,’ ” Staack’s mother, 51-year-old Judith Insell, recalls him asking about Martin, who was shot and killed at 17 years old in 2012 by George Zimmerman, a neighborhood-watch volunteer. “That started all of our talks about what it’s like to be a black man in America.”

“Make sure you have clean clothes on, make sure your hair is neat and tidy and make sure you’re holding yourself in a way to have people feel like you’re not going to do anything,” Insell recalls telling her son when he started walking himself to school at the Community Health Academy of the Heights.From that point on, the Hamilton Heights mom’s lessons have focused on keeping her son safe in a world that can still be unfair, and dangerous.

“We continue to have these discussions and unfortunately, until there are … changes in our society, we will have to keep having them.”

They arose again following headlines about the chokehold death of Eric Garner in 2014 and, more recently, after the death of Ahmaud Arbery, who was shot in February while jogging. The latter especially concerned Staack, who runs for the cross-country track team at his high school — and even made him question whether his regular workouts were safe.

“[Staack] loves to go for long runs … and here’s this person who’s doing the exact same thing, he’s a black man and he’s doing nothing wrong,” says Insell. “And he ends up dead … I think it made a huge impact on him.”

Insell says she feels it’s her responsibility to guide and educate her son about race even as he grows up and heads off to college. “You want them to go out in the world and be adults, and caring and contributing citizens — but always in the back of your mind is this fear that something bad can happen,” she says.