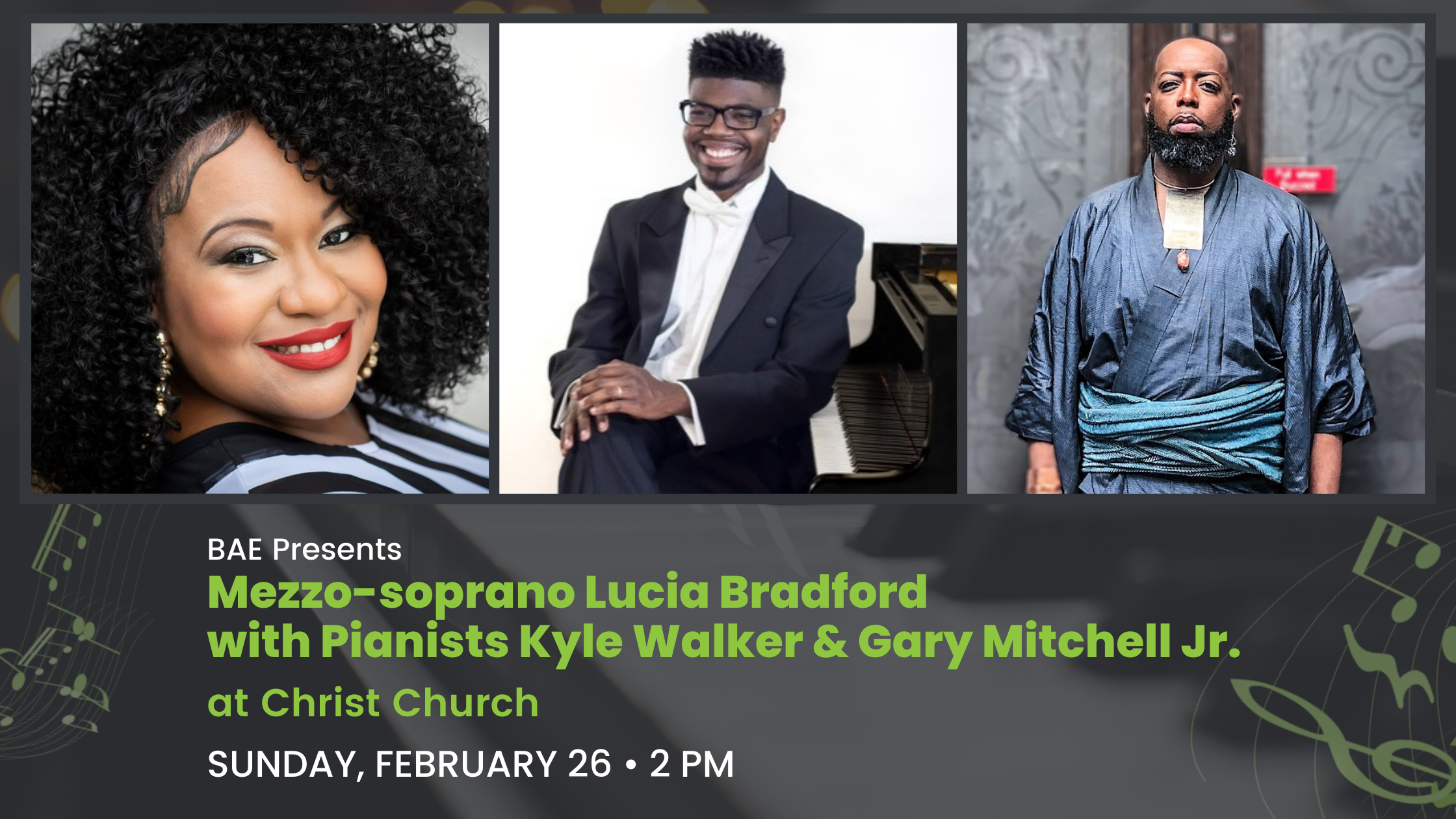 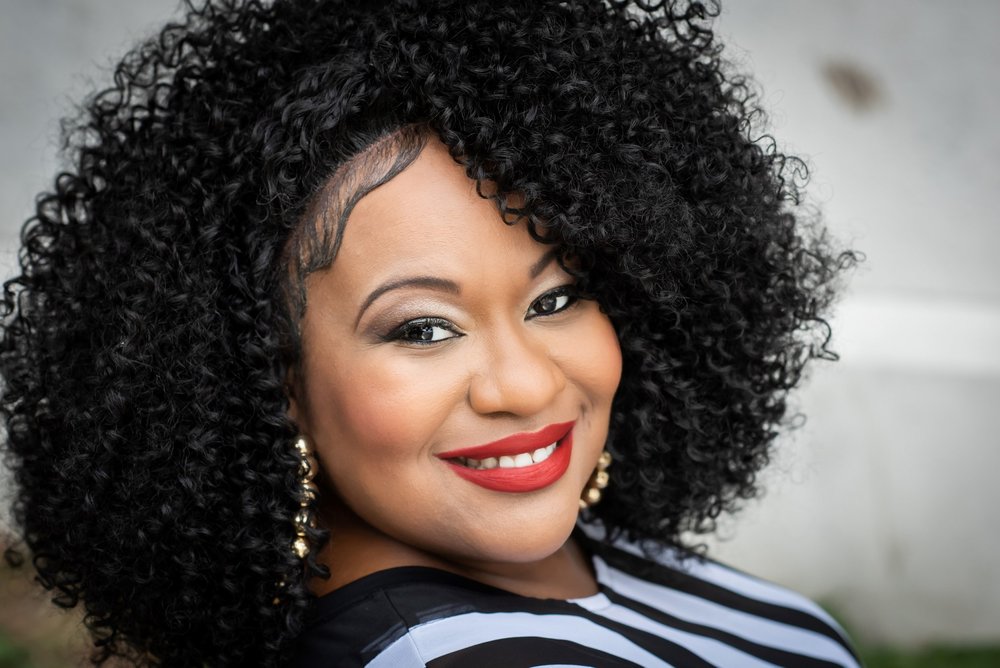 Mezzo-soprano, LUCIA BRADFORD is a native of Brooklyn, N.Y. Ms. Bradford has performed a number of operatic roles including Carmen in Bizet’s La Tragedie de Carmen, Zita in Puccini’s Gianni Schicchi, La Principessa in Puccini’s Suor Angelica, The Mother  in Ravel’s L’Enfant des Sortileges, Mercedes in Bizet’s Carmen, Mrs. Quickly in Verdi’s Falstaff,  The Sorceress in Purcell’s Dido and Aeneas, Gertrude in Gounod’s Romeo and Juliet, Hippolyta in Britten’s A Midsummer Night’s Dream, Miss Todd in Menotti’s Old Maid and the Thief, the Duchess of Plaza Toro in Gilbert and Sullivan’s The Gondoliers, Azelia Dessalines in the historic return of William Grant Still’s opera Troubled Island with New York City Opera at the Schomburg Center, Maria in Gershwin’s Porgy and Bess and the Mother of Paul Dunbar in the premiere of The Mask in the Mirror by Richard Thompson.

Ms. Bradford has had the privilege of singing and touring in Russia with the Krasnoyarsk Philharmonic Symphony Orchestra and the Radio Orpheus Symphony Orchestra in Siberia, Dubna and Moscow presented by Opera Noire of New York City. She has also toured in parts of Spain, the Caribbean and throughout the United States.

In addition to opera,  she enjoys performing in concert and recital settings. Namely, performing works of Schubert, Rossini and Moses Hogan at the prestigious Kimmel Center in the Verizon Hall in Philadelphia with the renowned Maestro Christoph Eschenbach at the piano, the alto soloist in Undine Smith Moore’s The Scene for the Life of a Martyr in Minnesota, appearing with chamber orchestras including the Harlem Chamber Players performing for their annual Bach series and the St Luke’s orchestra. Ms. Bradford also enjoys singing new compositions. She appeared in  New York City Opera’s VOX concert series performing a new work called Crescent City by Anne LeBaron as Marie Leveau also in Yoav Gal’s work called Mosheh as Miriam.

Ms. Bradford also enjoys singing other genres such as gospel and jazz. She is a member of Opera Noire of New York City and the American Spirituals Ensemble under the direction of Doctor Everett McCorvey. 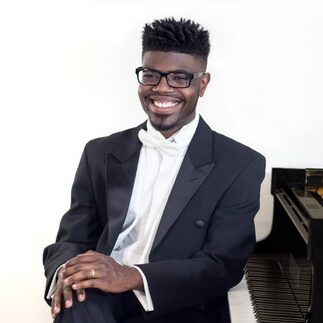 A strong advocate for social equality, critically-acclaimed pianist KYLE P. WALKER believes music can speak to social issues better than verbal language can, the understanding of which he brings to both traditional Western repertoire and that of the living world-wide composers with whom he collaborates.

His performances have been featured on media broadcasts including The Green Space at WNYC, WQXR’s Mcgraw-Hill Financial Young Artists Showcase, NPR’s Public Radio East, NPR’s 1A, and UNC-TV. He has been featured in solo recital at New York’s Weill Hall at Carnegie Hall, and with orchestra in Stern Auditorium at Carnegie Hall. Highlights of the past season include solo performances at The Apollo Theater, Colour of Music Festival,  solo recital tour throughout the East and West coast, and a Lincoln Center appearance alongside Miss America 2019. He is also featured in virtual performances with Fort Worth Opera, Illinois State University, Resolve to Save Lives, and a special Groupmuse presentation of American slave “Blind Tom” Wiggins.

Mr. Walker was featured in residency alongside Boston-based ensemble Castle of our Skins at The Isabella Stewart Gardner Museum, to create four short videos exploring this repertoire. The online series of free, digital programs explores the ways some Black American composers have found inspiration in the rich tradition of spirituals.

As an advocate of social justice Walker is a founding member and chamber music director of The Dream Unfinished, an activist orchestra which supports NYC-based civil rights and community organizations through concerts and presentations. As a teaching artist and educator, he has presented residencies at various institutions such as The University of Dayton, The University of Virginia, and the Music Educators workshop of Carnegie Hall.

In 2013, Mr. Walker was awarded the 1st prize winner of the Bradshaw and Buono International Piano Competition. He has also taken 1st prize in The National Talent Hunt of Omega Psi Phi, and the Greensboro Music Association Young Artist competitions.

A dedicated teacher, Walker is on faculty of the Lucy Moses School at Kaufman Music Center, serves as director of piano at Fort Lee School of Music, and on the chamber music faculty of The Artist Program at Suzuki on the Island. He has also co-presented alongside The Dream Unfinished at the Carnegie Hall Music Educator Workshop, speaking about building diverse curriculums for students, to include composers that look like the communities in which they serve.

Kyle Walker received his Masters of Music from Mannes College, The New School for Music under the tutelage of Thomas Sauer. He holds a bachelor’s degree from East Carolina University in addition to a special degree from University of North Carolina School of the Arts, and has studied with Benjamin Hochman, Keiko Sekino, Henry Doskey, and Clifton Matthews.

He is currently virtually and in-person touring with a solo performance project entitled Bach to BlackNotes, which features works of J.S. Bach juxtaposed with music of neglected composers who speak to issues of oppression and inequality. See and hear more of Kyle Walker’s musicianship on Instagram @klassicalkyle and at www.kylewalkerpiano.com. 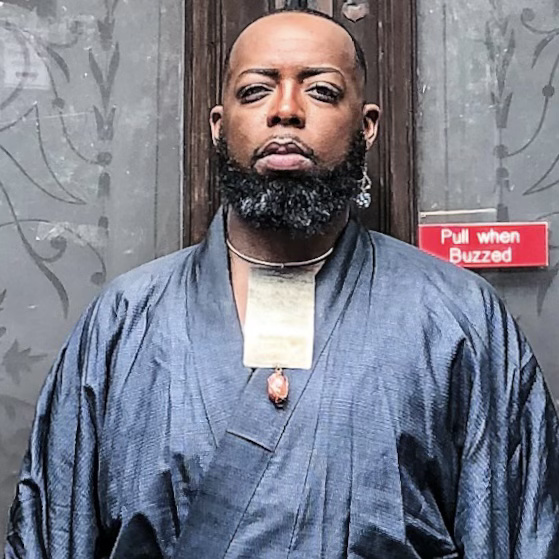 Gary debuted as Noah “Horse” T. Simmons in The Full Monty at The Clink Theatre, Port Douglas, Queensland, Australia; portrayed Jasbo Brown in Porgy and Bess at The Royal Danish Opera House-Copenhagen; and has been featured in myriad performances in Japan, Spain, Italy, Germany, and Switzerland.

Mitchell has been featured at Carnegie Hall, Lincoln Center, The Harlem Opera Festival, Teatro alla Scala, Dance Theater of Harlem, 54 Below, NAACP ACT-SO, Harlem Stage Theatre (Antigone in Ferguson), as Jimmy Powers in Lady Day at Emerson’s Bar and Grill, at Portland Stage Theatre, The Cape Playhouse, and he frequents Barrington Stage Theatre. He has also collaborated and performed with PBS, MTV, VH1, Steinway International, and Netflix, and in addition to working extensively with Rema Webb and Charl Brown, he was associate music director for the reading of Tituss Burgess’s The Preacher’s Wife.

Previously, Gary was a bass vocal artist at Houston Grand Opera and Artist-in-Residence at Wheeler Avenue Baptist Church Houston, and now serves as Director of Music and Arts Administration at First AME Church: Bethel-Harlem. He also conducts the mellifluous group he founded: Harlem Renaissance Chorale. He is  Artist-in-Residence at Union Theological Seminary, a member of the professoriate: Tougaloo College, Texas Southern University, and Houston’s High School for the Performing and Visual Arts, and has been a guest lecturer at Columbia University.